Google Launched Nexus 5 officially on October 31,2013 in San Francisco Press event.Like Nexus 4,Google has partnered with LG Mobile manufacturer Company to Manufacture Nexus 5. Google Nexus 5 comes with the latest Google’s Android 4.4 KitKat Update.Unlike Jellybean Google services has been integrated well in Android 4.4 KitKat update.Many minor tweaks has been made in design of the KitKat update,you can notice the new icons for phone,messaging and also Hangouts replaces the “messaging” app icon in the home screen dock.Like Windows Phone OS the hangouts messages and normal SMS has been merged along with voice call and video call function of Google hangouts.Status bar and notice bar is much transparent now will give you new look when you set a wallpaper of your choice.The full new features of Android 4.4 Kitkat can be found here which is posted by Google in its website. 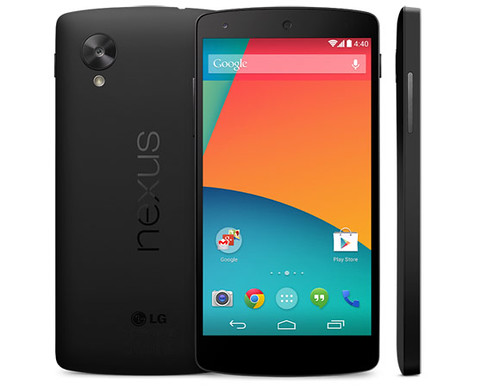 Google’s Nexus 5 is expected to hit the stores in India on November 12,2013 along with 2nd generation Nexus 7 Tablet.The previous release of Google’s Nexus 4 is available in India for 22,000₹ and low end variant of 1st generation Nexus 7 tablet is available for 10,000₹ while Top end variant of Nexus 7 Tablet is available for 17000₹  in India. As per Google PlayStore listing, price for Nexus 5 smartphone is 28,999₹ for 16GB variant and 32,999 for 32GB variant .The price of Nexus 5 smartphone is considerably low when compared with other top end models by Apple, Htc, Samsung, Sony.

Nexus 5 smartphone has 4.95″  TrueHD IPS plus capacitive Touchscreen with Full HD(1080p), Screen has Corning Gorilla Glass 3 for its protection against scratches and heavy damages.It has Quad-core Snapdragon 800 processor which is clocked at 2.2GHz coupled with 2GB of RAM for Fluid performance and Gaming.And it has 8Mp camera on its back and 1.3 Mp camera on its front for video calling purpose and it supports 2G,3G,4G and Wi-Fi ,NFC ,Wireless Charging  and 2300 mAh battery under the hood and also it supports LTE unlike Nexus 4.The device doesn’t support Micro-SD instead it comes in 16GB and 32GB versions and weighs 130g.