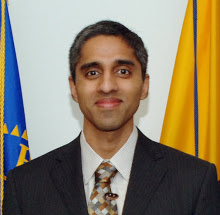 If confirmed Dr.Vivek Hallegere Murthy will be the First as well as youngest Indian-American to be in this post as Surgeon general of the US.Many people expressed their views upon Obama’s nomination.

“Indian-Americans have made many important contributions to American society, including in the medical field, and it is great to see another well-qualified leader rise in government,” said Mr. Crowley

Dr. Donald Berwick, former chief of Medicare, and current gubernatorial candidate in Massachusetts said, “By nominating Vivek Murthy, President Obama has chosen one of the finest doctors in our nation to be our next Surgeon General…As Surgeon General, I am confident that Dr. Murthy will use his exceptional leadership skills to raise awareness of pressing public health issues, including childhood obesity, and continue fighting to ensure that all Americans have access to quality, affordable healthcare”

Dr. Neel Shah, founder of the non-profit, Costs for Care said, “In addition to being a brilliant physician, Vivek is a thoughtful and compelling leader who motivated thousands of physicians across the country (including myself) to seize the opportunity for healthcare reform when the President was elected. On a personal level, he is a generous and inspiring friend who listens carefully before giving sage advice and I’ve watched him apply these abilities as an effective grass roots organizer – that’s the thing about Vivek, everyone who encounters him considers him a good friend”

It is to be noted Murthy is the founder and chairman of TrialNetworks, a cloud-based platform for pharmaceutical and biotechnology trials that improves efficiencies in clinical drug trials, bringing new drugs to market faster and more safely.And also he founded the company as Epernicus in 2008 to originally be a collaborative networking web platform for scientists to boost research productivity.he has also been a leader in H.I.V. prevention and AIDS education, co-founding and serving as president and chairman of a non-profit organization, Visions Worldwide, focused on that mission in the U.S and in India Since 1995.The surgeon general serves a four-year term and is the administration’s top official on public health issues.