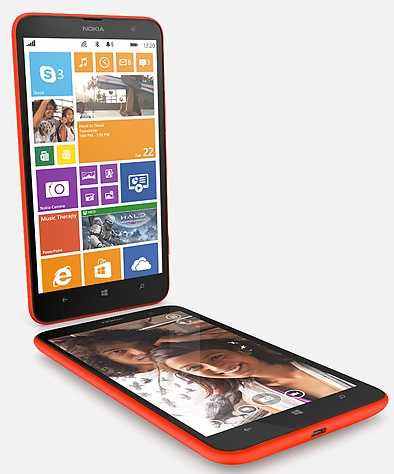 The Finnish Mobile manufacturer announced Nokia lumia 1320 along with Lumia 1520, Asha series and Nokia 2520 Windows RT Tablet.Lumia 1320 is second 6-inch Windows phone from Nokia next to Lumia 1520.Lumia 1320 can be called as Budget Windows phone as it is priced  339$ which is around 21,000 Indian Rupees.Nokia Lumia 1320 is the only Budget friendly Business Smartphone out there now with inbuilt Microsoft Office,Microsoft Exchange,Office 365 and Lync for Professionals.

The Lumia 1320 is 6-inch IPS LCD display with 720x1280pixels resolution with Nokia Clear Black Display(CBD) technology to read under sunlight conditions and corning Gorilla Glass 3 for protection against scratches.Lumia 1320 has 8GB inbuilt storage with microSD card supports up to 64GB,in addition to this you can also enjoy  free 7GB  Skydrive cloud storage from Microsoft.Lumia 1320 has 5Mp rear camera with LED flash and VGA camera on its front for video calling purpose and it is powered by Dual core Qualcomm snapdragon s4 processor clocked at 1.7GHz , Adreno 305 GPU coupled with 1GB of RAM which will give you fluid experience while using the phone and 3400 mAh battery under the hood.

Lumia 1320 runs Windows Phone 8 Lumia black update,unlike Lumia 1520 it doesn’t sport 1080p but still you can enjoy third row live tile support on your start screen.The main difference  between Lumia 1520 and Lumia 1320 is Processor , Lumia 1520 is powered by Quad core Snapdragon 800 clocked at 2.2GHz whereas Lumia 1320 is powered by Dual core Snap dragon s4 processor clocked at 1.7GHz, next notable difference is Lumia 1520 has 20Mp pureview camera on its back whereas Lumia 1320 has only 5Mp camera on its back.But Considering the price offered by Nokia for lumia 1320 ,Nokia has provided more good features for 339$ price.Both the Lumia 1520 & 1320 comes with vibrant colors like other Lumia models.Lumia 1320 might hit the stores on first quarter of 2014.