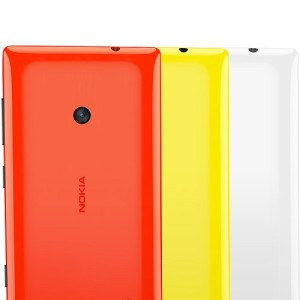 Today Nokia unveiled Nokia Lumia 525 successor  to the Most popular Windows phone Lumia 520.Pics and Specs already leaked by some Chinese website few days back but only the specs were seems to be true not the design.The new Nokia Lumia 525 design is identical to Lumia 520 with glossy premium look and changeable back shell with black,white,orange and yellow colors .There is no much change in specs when compared to its predecessor Lumia 520.The Notable change is Lumia 525 comes with  1 GB of RAM and 8 GB inbuilt storage on board.The Main reason for Windows Phone success is Lumia 520 as it is budget friendly and as expected it soon became primary option for those who wanted to try new OS apart from Android and iOS.

It is true that due to Lumia 520’s Low RAM, Lumia 520 users were  unable to download and play new games from windows store.Now Lumia 525 solves this problem as it comes with 1GB of RAM.Apart from RAM Lumia 525 is specs is same, it comes 4 ” WVGA Screen and Dual core 1GHz processor and 5 Mega pixel Camera with no flash just like Lumia 520.According to The Verge Nokia Lumia 525 will not get launched in US initially like its predecessor instead it will get launched in Singapore in December 2013 for 199$ which is considerably higher than than Lumia 520.Lets wait and see how Nokia will price it in India.