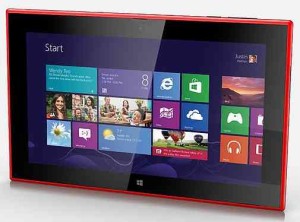 Nokia unveiled Nokia Lumia windows RT 8.1 Tablet in the press event which held in  Abu Dhabi on Oct 22,2013 along with Lumia 1520, Lumia 1320 and Asha Series. Nokia Lumia 2520 is the first Tablet from Nokia that runs Windows RT 8.1.We all know that Windows RT is not very much welcomed among  people like other operating systems out there.Microsoft introduced Windows RT with the introduction of  Microsoft Surface RT tablet which was merely Failure due to the high price as well as lack of apps and games in windows Store.But Still Microsoft didn’t give up on Windows RT ,last month Microsoft announced new Surface RT in the name of “Surface 2” .Now again Microsoft  used Nokia’s hardware coupled with Microsoft Windows RT and released a Nokia Lumia 2520 with beautiful glossy polycarbonate unibody design.

With Lumia 2520 Nokia enters in to Tablet market considering Apple and Google as its competitors. But in real Microsoft Surface 2 is the real competitor for Nokia Lumia 2520.Lumia 2520 is 10.1 inch screen with 1080p resolution, Full HD with Gorilla Glass 2 for its protection.Nokia Lumia 2520 has the superior brightness screen of  650nits with sub 6% light reflectance compared to other tablets in the markets Lumia 2520 has the high brightness to read your content under bright sunlight without any difficulty. 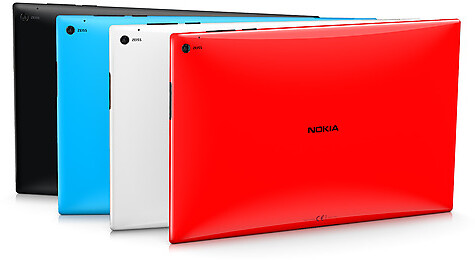 Lumia 2520 weighs 615g which is lighter than 4th gen iPads and Microsoft Surface 2 with thickness of 8.9mm but little heavier than the latest Samsung Galaxy tab 10.1,it comes with various colors like other Lumia models ie.cyan,red,white and black.It has slots microSD, micro SIM, USB 3.0 port as well as HDMI output port and 3.5mm headphone jack, with the Nokia power keyboard you will getting 5 hrs of battery life plus two extra USB ports.

Lumia 2520 has 6.7 Mp camera like in the Nokia Lumia 720 but flashlight is absent at the back,So we can’t rely on low light conditions. It has an aperture size of f/1.9 and auto focus option.we can record the videos at 1080p (30 fps).2Mp camera at the front with the wide angle  for video calling purpose.Nokia smart camera app is loaded by default which will ease your work when it comes to photo and video editing.

Nokia Lumia 2520 is powered by Qualcomm Snapdragon 800 clocked at 2.2GHz coupled with 2GB of RAM for fluid performance . Adreno 330 GPU on board for heavy gaming and multi tasking purpose.Without any doubt Lumia 2520 can be a competitor for its rivals.sadly there isn’t much HD games or Apps in windows store  to utilize these resources like its rivals,Both Apple store and Google Play store has huge number of HD games and Apps.Microsoft is trying in all the ways to bring the developers in to improve to App ecosystem of windows.Lumia 2520 has 32GB on board memory plus microSD support adding to that free 7GB of Skydrive space offered by Microsoft which is very well integrated into the OS.On the connectivity side ,Lumia 2520 supports 3G/4G LTE, GPS radio with GLONASS support,NFC,Bluetooth 4.0.

On the Software side Lumia 2520 comes with preloaded Microsoft goodies like Microsoft Office,Word,Outlook,Lync,Office 365,PowerPoint,Excel.Nokia crafted Lumia 2520  perfectly for students and working professionals who like to do things on the go.Lumia 2520 allows you to create and edit documents seamlessly without any difficulty on the go just like we do in the PC.You can enjoy Full fledged Microsoft office suite in Lumia 2520 for free,which you cannot see in any other tablet.Apart from these you can enjoy Nokia goodies too like Nokia Music service which lets you to enjoy latest music for free with out any cost and allows you create your own Radio mix,and Offline free navigation for lifetime,downloadable Maps for offline use,HERE Map service,HERE Transit and latest addition Nokia Storyteller integrated with HERE Map Services to tell your stories along with places,Video editor plus Ringtone editor and much more.It is known fact Windows RT lack in App Ecosystem but Microsoft already covered all the needful Apps and Microsoft officially announced Instagram ,Vine is going to be launched soon for Windows Platform.

Lumia 2520 has 8000mAh battery that can playback your video for 11 hrs continuously which is quite high comparing to other tablets.With Nokia Power Keyboard you can get extra 5 hrs of battery backup.The Stock charger can now fill your Lumia 2520 80% charge in just 1 hour.Without any doubt there won’t be any problem on your Lumia 2520 battery life.Nokia Lumia 2520 is priced 499$ USD which is around 31,000 – 33,000 Indian Rupees before local taxes and subsidies initial sales will be in US,UK and Finland,and it is expected to hit stores on holiday season.Hope Nokia may change the fate of Windows RT i n tablet market.