India Begins Construction of the Tallest Statue in The World,The Statue of Unity Project was announced by Government, monument of Sardar Vallabhai Patel who was the first Home minister of Independent India.The total height of the statue from its base will be 240 meter consisting base level of 58 meter and statue of 182 meter. It will be constructed with steel framing, reinforced cement concrete and bronze coating.The Statue of Unity will be 182 Meters In height ie.597 Ft and including base it will 280 Meters which is 790 Ft in total. 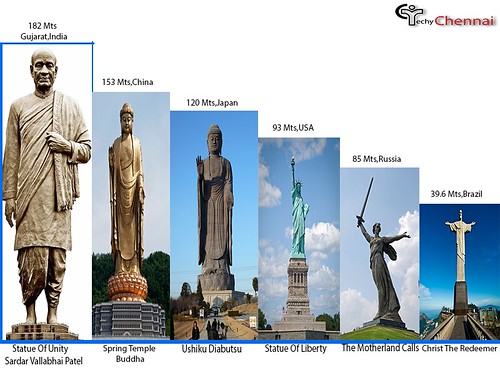 The Construction already begun in Oct 31,2013 in Gujarat (India). The Entire Project would  cost around ₹2063 Crore approximately.Gujarat Chief Minister Narendra Modi laid the foundation stone of statue on 31 October 2013, the 138th birth anniversary of Sardar Vallabhai Patel.The Gujarat Government allotted ₹100 Crore for construction of the Statue of unity in 2012-13 Budget.The present Chief minister Of Gujarat Narendra modi have asked Indian Citizens to donate scrap metals and tools which would help for the construction of Statue of unity.

“We have asked farmers from every village in India to give old pieces of their agricultural tools, just 200 grams or 400 grams would do,” said Narendra Modi.

It will take 56 months for the completion of the project.It is to be noted after completion It will be twice the height of Statue Of Liberty(93 Mts),United States Of America which is famous Worldwide.There are other tallest statues higher than the Statue of Liberty ,at present Spring Temple Buddha which is located in China is the tallest Statue in the world which is 153 meters high.Soon it will be second tallest statue after the completion of Statue of Unity,India